« The complexity of Breker’s situation is also evident in the fact that many others besides the Nazis saw their ideological aspirations reflected in his work. Josef Stalin was so impressed by the works that were shown in the German pavilion at the 1937 World Exposition M Paris that he expressed an eagerness to engage Breker. This offer was repeated in 1946 at a time when Breker, considering his difficult circumstance, was perhaps more inclined to accept. Yet Breker demurred, noting rather humorously, « one dictatorship is sufficient for me ». A pattem devel­oped during the Third Reich and continued after the war whereby « strong » leaders often admired Breker’s sculptures, indicating that Breker’s style had application beyond a Nazi (or even fascist) context. The list of those who acquired and utilized his works includes Mus­solini, Haile Selassie, Leopold Senghor and Mohammad V of Morocco. This raises a number of questions, including whether he actually tai­lored his work to the marketplace of Third Reich and whether he (or any other artist) bears responsibility for his or her creations. While Breker responded directly to the patronage of certain leaders (including not only Hitler and other Nazis, but also Mussolini), the appropriation of his work by others was often beyond his control. This led to some strange developments, such as sculptures by Breker that were exhibited in Eberswalde, forty kilometers northeast of Berlin in the former East Germany, at a sports complex adjoining a Red Army military base. Although it is unclear when Breker’s sculptures were placed there it is evident that some came from the World War II booty that fell into the hands of the Soviets after having been taken from the remnants of Breker’s workshop at Wriezen some 20 kilometers away (Breker also reported sculptures stolen from a warehouse near his Berlin studio). Breker’s pieces there were next to works sculpted by Josef Thorak (one of his 1939 Reich Chancellery figures) and Fritz Klimsch (pieces for the 1936 Olympiad). This appropriation of his work by the Soviets and East Germans was clearly contrary to Breker’s will. He remained polit­ically conservative and had no desire to bolster either communist regime. » 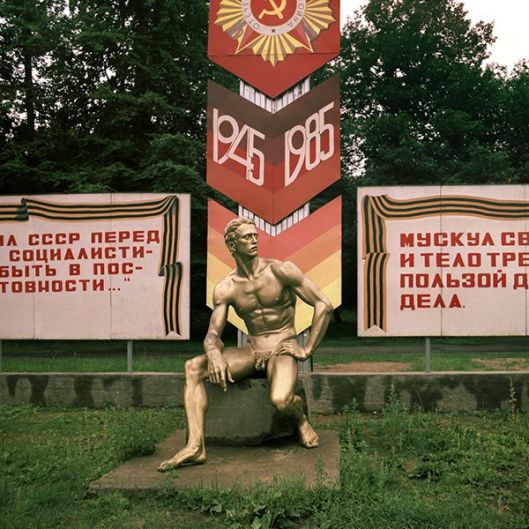